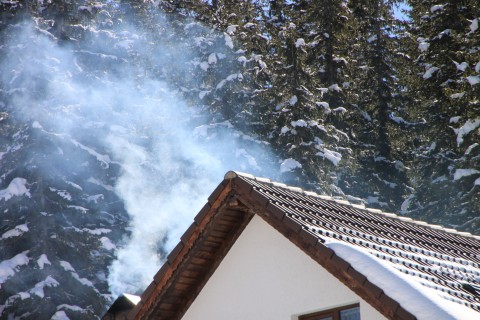 When you’re attempting to fix any problem, it helps to know a little bit about how the system you’re troubleshooting works. In terms of fixing a chimney, there are several confusing terms, some more technical than others. However, if there’s one thing you need to know about chimneys, it’s that even the simplest chimney draft problems can create an unhealthy and unforgiving living environment.

An issue with the draft can cause combustible chemicals to back up and rather than being filtered out of your home, they work their way in. A properly working draft will take the harmful gases and smoke, and safely vent them out of your home through the top of the chimney flue.

How a Chimney Works

Chimney’s function alongside a very simple concept, and that’s that hot air rises. When your fireplace is burning, the hot air and combustible gases vent upward, and as long as that is met with cooler air near the top, it’ll vent out of the chimney flue and outside of the home. When a chimney is malfunctioning, the source of the problem is usually the air pressure within the home that’s preventing the smoke from drafting out. This is usually when a back draft occurs, and that’s when all those toxic gases, soot, and smoke enter the home.

Draft Problems with the Firebox

There are two main problems that the firebox can cause that can result in some serious damages, these more often than not include:

What to do With Persistent Draft Problems

If you have persistent chimney draft problems and you’ve done everything you can think of, give your local chimney sweep a call. If there’s a bigger problem, they’ll be able to find out, and if you need a new chimney liner kit or any other new parts installed, they’ll be able to help you with that as well. Keep in mind that you want to have your fireplace inspected annually, and it’s recommended you do it before it starts getting cold outside.