What Damage Can Creosote Cause? 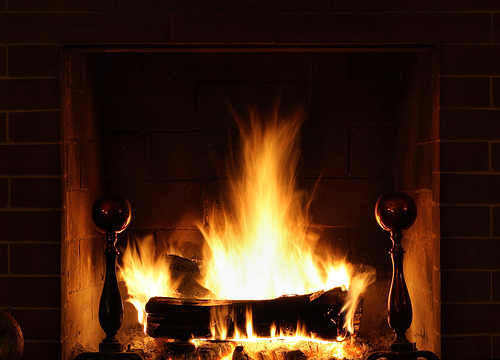 One byproduct of wood burning fireplaces and stoves is the creation of a chemical compound called creosote. A fireplace or stove with even a modest accumulation of creosote can result in a highly dangerous chimney fire, which can burn at around 2,000 degrees, seriously endangering your home and any occupants.

Exactly What is Creosote?

Any wood burning fire produces byproducts of combustion, in short, the residue that is left over when the wood burns. Some of these include seemingly innocuous smoke water vapor, particles of wood and assorted minerals or other substances found in the wood.

The chimney is there to help expel these from the house, but what happens is that when these flow up the (relatively) cool chimney, and condensation rears its head and a residue is produced that will cling to the chimney walls. This is known as creosote.

Creosote is seen as a shiny black or brown substance, sometimes flaky, but can be tar-like. Creosote is highly combustible, and when present in sufficient quantities creosote can lead to disastrous chimney fires. Creosote buildup is usually the result of incomplete combustion of the wood.

Sooty creosote is the most easily handled. When it appears in a hard, glazed tar-like version it can be most dangerous and requires professional help to make your chimney safe to use again.

There are a number of legitimate health concerns when it comes to the inhalation of creosote. Some known maladies attributed to  creosote exposure include:

How to Avoid Creosote Accumulation

While it is impossible to avoid creosote being produced, there are a number of factors that help in mitigating the risk of creosote buildup and a resulting chimney fire. Avoid low-burning fires, (in which complete combustion is never achieved), improperly installed fireplace inserts, overloading the firebox with wood, not having the chimney damper open sufficiently, and insufficient air circulation in the chimney.

Burning unseasoned wood is another major contributor to creosote buildup in your chimney. The energy used to burn off the moisture in the wood sets the stage for easy creosote accumulation.

Creosote accumulation in your fireplace or wood burning stove is something to be taken quite seriously. Make sure yours is being checked by a certified chimney sweep to keep your home safe and warm year-round!